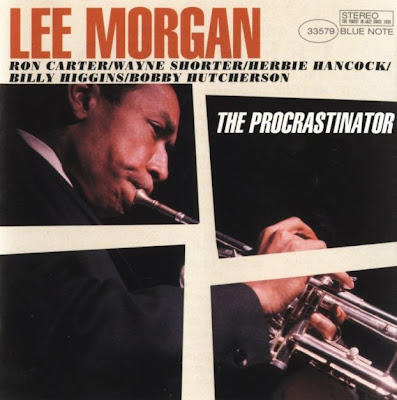 This album is prime mid-sixties Lee Morgan, in the company of five stellar associates. Billy Higgins had been Morgan's drummer from The Sidewinder forward; thus he and Morgan had recorded with Wayne Shorter (on Search For The New Land, and The Gigolo) and Herbie Hancock (Search and Cornbread). Bobby Hutcherson was the leading vibes innovator of the era and (like Morgan, Shorter and Hancock) a Blue Note contract artist: he had previously worked with Morgan on Grachan Moncur's Evolution. While Ron Carter's bass had not been heard behind Morgan he was perfectly compatible and, of course, he worked with Shorter and Hancock in the immortal Miles Davis Quintet of the time. One fascinating sidelight of the session is that it took place in the middle of the production of Davis' Nefertiti.

"The Procrastinator" is a stunning Morgan composition with a variety of strengths. During the slow section, the main theme conveys a majesty akin to the classic "Search for the New Land," while the counter-melody on the bridge could pass for the work of John Lewis; once the tempo arrives, however, the line shows how perfectly it assumes a relaxed hard-bop lope. Morgan is extremely poised and, the pinpoint brilliance of his sound notwithstanding, mellow. Shorter sounds very Trane-ish, as he did on some of his own Blue Note dates of the time (and for the most part didn't with Miles), and Hutcherson is joyously fleet. Blue Note's "house" pianist of the time (Hancock, McCoy Tyner, Andrew Hill) always brought out the best in the vibist, and the value of Hancock's support here is unmistakable. The pianist lets his own lines soar, with minimal use of the left hand, and comments pithily behind the ensemble as he does throughout the session.

"Party Time," a staccato medium blues, shows the ability of these men to get into a groove without affectation. Hancock's subtle voicings and shifts in attack sound easy but are actually quite sophisticated, as are Shorter's beautiful simplicity and Morgan's tonal innuendos.

Shorter's "Dear Sir" takes the sextet into the ethereal atmosphere of the Davis quintet. The slow, calmly twisting 16-bar line floats in characteristic Shorter fashion with harmonic modulations and rhythmic emphasis appearing at unexpected places. In the tenor solo we hear a different Shorter from "The Procrastinator," a quietly compassionate and highly intelligent voice that has synthesized Coltrane, Rollins, Young and Getz. Hutcherson, whose approach is quite different, achieves an incredible unity, of mood, and Hancock is this mood. The trumpet player on a piece like this must obviously confront Davis' example, and Morgan does sound uncommonly close to Miles in a solemn solo.

Morgan's bright "Stop-Start" does just what the title implies. Everyone digs in and flies here (note the change in Shorter), with Hancock bouncing ideas between left and right hands in what might be called his "Blue Note style" (with Davis he often played what amounted to right-handed solos). Morgan breaks up his lines in order to play with the beat, creating the impression of a man whipping the music with controlled fury. There are moments of disorganization in the fours with Higgins, but they hardly impair "Stop-Start's" glowing energy.

Carter begins "Rio" with some characteristically reverberating lines. Shorter's melody is a terse quasi-bossa nova, 14 bars in length, which has an infinite quality akin to so many of Wayne's pieces (like unravelling an onion skin). Hancock and Shorter are most adept in this setting, with the composer working in his enveloping lower register and displaying his elegant thematic bent.

With its off-center intro by piano and bass and its stealthy theme, Morgan's "Soft Touch" displays some Shorterish sensitivity. This was the last recorded meeting of the two horn men, who had complemented each other so brilliantly since 1959 in the Jazz Messengers, and "Soft Touch" reminds us how each (in different ways) was a master of tantalizing ambiguity. Morgan's casual cockiness and Shorter's gruff nonchalance both work, aided by the taut rhythm section. Hutcherson piggybacks phrase on phrase and shows off his bright metallic sound, while Hancock seems to buff his already lucid ideas through repetition. Lee had recorded this tune with Jackie McLean in 1965 as "Slumber."

--BOB BLUMENTHAL, from the liner notes,
The Procrastinator, Blue Note.