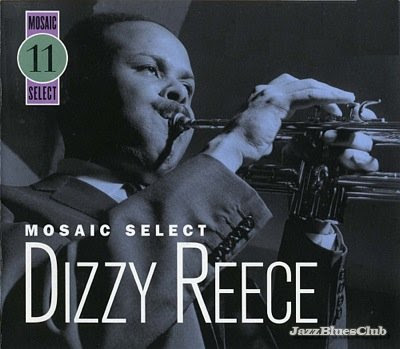 The 11th volume in Mosaic's Select series is one of its finest. Devoted to the Blue Note recordings of Jamaican-born trumpeter Dizzy Reece, it offers a particular portrait of one of hard bop's most capable practitioners. There are five sessions compiled here, issued on four albums -- the legendary debut Blues in Trinity (1958), Star Bright (1959), Soundin' Off (1960), and Comin' On! (1960). These sides were the introductions American audiences had to the hot licks trumpeter who offered a wealth of influences and styles in his solos and compositions.

Singling out Blues in Trinity is necessary because it was the transition album for Reece, whose reputation preceded him -- via the critical raves of Miles Davis -- to American jazzmen, and was recorded in Paris. Americans Donald Byrd and Art Taylor were working in the city as was Canadian bassist Lloyd Thompson; add to this two vacationers in the form of British alto legend Tubby Hayes and pianist Terry Shannon, and you have an international jazz summit. An unusual sextet session with two trumpeters, the set includes no less than six Reece originals and a wonderful read of Monk's "'Round Midnight." Reece's blues pieces -- the title track, "Close Up," and "Shepard's Serenade" (with a blazing solo by Hayes) -- are tough, lean, hard-blowing sessions, full of knotty line configurations and intense, over-the-top solos by the horns.
Its follow-up Star Bright also included Taylor, but the rest were current and future Davis sidemen including Hank Mobley, Paul Chambers, and Wynton Kelly. The rapport between Mobley and Reece is of particular interest because of the sharp contrast in their playing styles and tones. Mobley was already moving toward his soulful, bluesy approach and his tone was warm and fully juxtaposed to the fiery phrasing and bright, brittle tone exhibited by Reece on his tunes such as "The Rake" and "Groovesville." Soundin' Off offers Reece in a quartet setting without any other horns on the front lines, Taylor is once again on the set with pianist Walter Bishop, Jr., and bassist Doug Watkins completes the band. What is interesting is in the longer lines Reece is featuring in his solos and his willingness to stretch time by relying more on Taylor's long-ish beat, such as on "Once in a While" and "Blue Streak." Reece's final album for Blue Note is two separate sessions. Besides Reece, the only constant is saxophonist Stanley Turrentine. On the first half of the disc, Art Blakey, bassist Jymie Merrit, and pianist Bobby Timmons usher in the bluesy, soulful groove that Reece began exploring in his playing in early 1960. This is fleshed out further when saxophonist and flutist Musa Kaleem is added to the front line, and the rhythm section features Al Harewood, bassist Sam Jones, and pianist Duke Jordan. Here was the extension of hard bop into the beginnings of funky soul. Reece's tempos slowed just a bit, but his gut-bucket groove got deeper and wider. His soloing offered the same strident musculature, but it was more reliant on following the blues line rather than breaking it into fragments. The underlying swing on this session is wonderful and continuous despite the presence of two bands. This is one of those box sets a jazz fan will be eternally grateful for. There was nothing left in the can, so these sides are complete without bonus material, but it hardly matters when they are all assembled in one place.
(Thom Jurek)