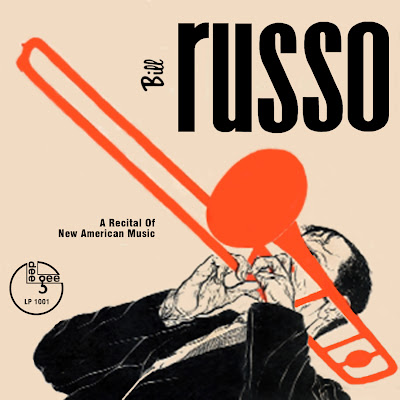 REVIEW:
In the late Forties trombonist and composer Bill Russo, a young and prominent disciple of Lennie Tristano, was already leading his own experimental studio bands in Chicago. He always composed with a concern for jazz, and did much in the field of advanced orchestral writing, finally rising to fame when successful bandleader Stan Kenton hired him in early 1950. He became one of Kenton’s most brilliant orchestra arrangers, but decided to return to his hometown in 1955 to continue writing and conducting. He proved to be an extraordinarily well-informed individual in diverse areas, with the felicitously stimulating personality of one who is always an intellectual but never an intellectual snob. He worked in the jazz and classical fields and, in his opinion, a good symphony musician could play really swinging jazz if it was properly written. And he brought a much needed insistence on integrity to the music. This CD compiles the most important of his early works, including The World of Alcina, a ballet score in five dances which Russo defined as “a piece written in terms of my background in jazz.” ~ Absolute Distribution

:: A Recital Of New American Music ::