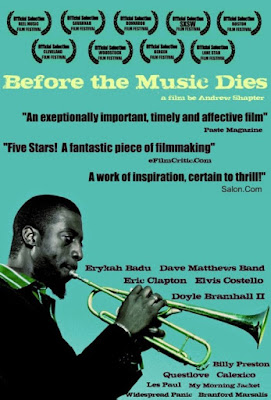 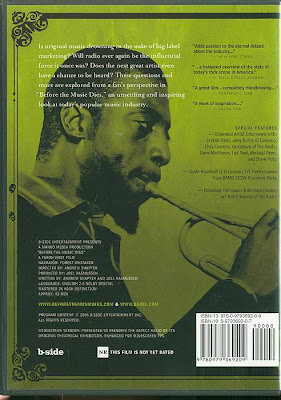 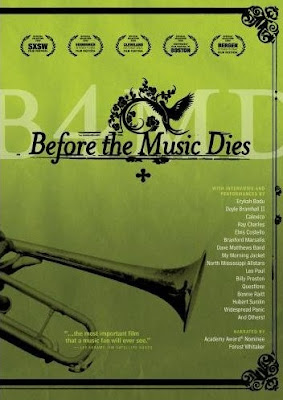 Let's get the obvious out of the way first. This is a great film. But more than that, it is an important film.
Before The Music Dies says a lot of the things many music fans have been thinking for years now. It also asks the single most fundamental question many of us have pondered over: Has the music industry abandoned both music fans--and more importantly, the musicians themselves--in the almighty name of commerce over actual art?
To find the answer, Andrew Shapter and his team travelled from coast to coast, speaking with fans, critics, and several musicians--ranging from household names like Eric Clapton and Elvis Costello--to a number of people you have never heard of (but in a number of cases, you should have). Academy award winner Forest Whitaker narrates.
In doing so, several of the villians you've come to know and hate are uncovered as expected. These include the usual suspects such as the huge, faceless radio conglomerates like Clear Channel and the tight, restrictive playlists such corporations ushered in. The way music videos forever changed the way we experience music by coloring in the images we previously were able to conjure ourselves--emphasing the flavor of the moment, and pretty faces that are discounted as fast as you can say Britney Spears--are also given ample examination.
And let us not forget the record companies who have replaced old school "record guys" cut in the mold of people like Columbia's great John Hammond and Atlantic's Ahmet Ertegun, with corporate bean counters whose ties run far closer to Wall Street than they do to Abbey Road or Muscle Shoals.
I mean, it used to be about the music, man. Right? 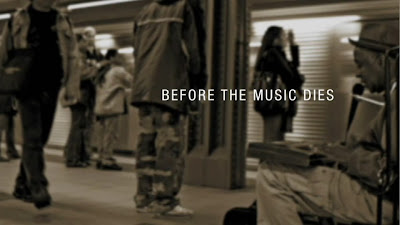 Truth is, much of this ground has been covered before, and in great detail, most notably in books like Fred Goodman's great The Mansion On The Hill. Like that book's subtitle, this is a film dealing with the collision of music and commerce. But where that great book puts things in terms of both a historical perspective and what was at the time it was written, a warning--Before The Music Dies brings things full circle into the present day world of MP3 downloads and the like.
Rightfully so.
Before The Music Dies applauds the instant access to music that such former traditional delivery systems as the LP album and the cassette--and the soon to be extinct CD--have long since been put out to pasture by way of restricting what the mass audience is actually able to hear. My only complaint here is that it fails to likewise address the way that such instant access reduces music to more of a single song driven commodity, than it has ever been before. Wonderful thing that this technology is, the bottom line is that the guys running companies like Microsoft and Apple have even less of a connection to the music itself than their predecessors at places like Warner and Sony did.
What was that famous line from Pete Townshend about "meet the new boss, same as the old boss?"
Still, this is an absolutely fascinating, and dare I say it, important film. It is also one that asks all of the right questions at exactly the right time about whether we are going to surrender the art and the heritage of our music--and the culture it represents-- forever to some faceless, corporate monolith--whatever mask it chooses to wear. This is truly thought provoking stuff.

Of the artists interviewed--people like Erykah Badu, Dave Matthews, and Branford Marsalis--several things also stand out. Marsalis for example rightfully points out how Bruce Springsteen would have been "thrown out on his butt" by today's record companies after releasing several records sounding nothing like Born To Run.
Erykah Badu likewise puts things into the modern perspective of how todays artists better show up with their cleavage hanging out. This, from an artist who has done more to summon the ghost of Billie Holliday and out it in a modern hip-hop sort of perspective than anybody I can think of.
Before The Music Dies also introduces us to some great new artists I had previously never heard of. These include Doyle Bramhall II--who is championed by no less than Eric Clapton as the "real deal"--and Calexico, a band who combine some very nice atmospherics with a Spanish sort of flavor.
For people who truly love music, this film is a must. You can view a trailer for it by going here. Be sure to click on the fast forward, double arrow function once the trailer ends too. There you will find one of this film's truly revealing gems--how a talentless 17 year old model is transformed into a "singer" by modern day studio technology.
Download @ RS
Part 1 - Part 2 - Part 3 - Part 4 - Part 5 - Part 6 - Part 7

USE 7-ZIP TO EXTRACT