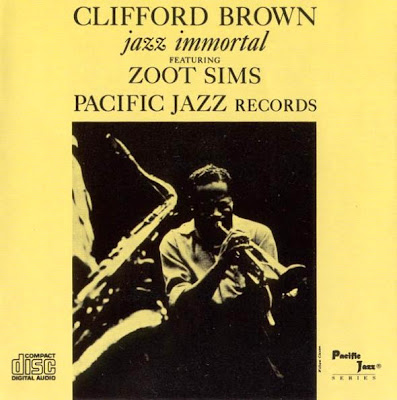 Amazon.com:
While at the time Clifford Brown was associated with East Coast jazz and the burgeoning hard-bop movement, these 1954 Los Angeles recordings show that he was just as much at home and just as welcome in the midst of the West Coast's cool school. Jack Montrose wrote the arrangements for this septet, and the band is perfectly formed to showcase Brown's brilliant trumpet sound, contrasting it with the lower-pitched but lighter sounds of Zoot Sims's tenor saxophone, Bob Gordon's baritone, and Stu Williamson's valve trombone. Brown's best-known compositions, "Daahoud" and "Joy Spring," are heard in their debut recordings here, and they're well suited to the Montrose treatment, with Brown's scintillating bop lines moving fluidly within the developed ensemble harmony. The other horns have some fine solo moments, but it's Brown who stands out, the precision of his attack highlighting the subtlety and invention of his solos. Pianist Russ Freeman and drummer Shelly Manne contribute tasteful support throughout, and the new remastering by Rudy Van Gelder highlights both the brassy sheen of Brown's playing and the lightly grained reeds. --Stuart Broomer
Link