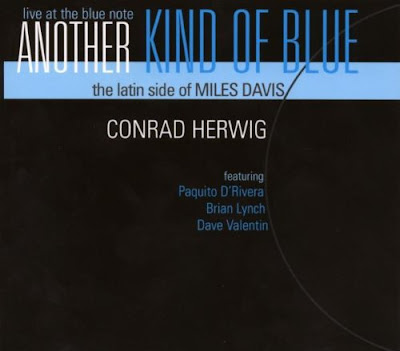 Biography by Chris Kelsey
Conrad Herwig is one of New York's more prominent young progressive/mainstream trombonists. He has recorded and/or performed with a number of famous leaders, including, but not limited to, Joe Henderson, Jack DeJohnette, and Paquito D'Rivera. Herwig is an alumni of the famous University of North Texas jazz program, an experience that obviously prepared him well as a big band player. He began his professional career in the early '80s with Clark Terry's big band; stints with Buddy Rich, Toshiko Akiyoshi, Mel Lewis, and others were to follow. Herwig became an increasingly in-demand sideman in the '90s. He is an accomplished pedagogue, having taught clinics and workshops around the world. Herwig is on the faculty at William Patterson College in New Jersey. His seventh album as a leader, The Latin Side of John Coltrane, emphasizes an affinity for South American idioms. Criss Cross followed in 1998 and a year later, Herwig resurfaced with Osteology. Unseen Universe followed in fall 2000.

Review by Scott Yanow
Trombonist Conrad Herwig, who had previously recorded The Latin Side of John Coltrane, is at it again. Another Kind of Blue has versions of the five songs from Miles Davis' Kind of Blue ("So What," "Freddie Freeloader," "Blue in Green," "All Blues," and "Flamenco Sketches") plus "Petits Machins" performed by a Latin jazz nonet. The results are quite enjoyable and, with the exception of the repertoire and a couple orchestrated sections for the ensemble (the introduction of "So What" by Bill Evans and Paul Chambers, and Davis' trumpet solo on "Freddie Freeloader"), the music has little connection to the original Kind of Blue with Miles Davis, John Coltrane, and Cannonball Adderley. Instead, the transformation serves as a good excuse for the all-star group to romp and come up with fresh ideas. Herwig, trumpeter Brian Lynch, baritonist Mario Rivera, and flutist Dave Valentin have their moments, but Paquito D'Rivera on alto and clarinet constantly steals solo honors; he is too exciting to be denied. The horns are inspired by a blazing rhythm section consisting of pianist Edsel Gomez, bassist John Benitiz, drummer Robby Ameen, and percussionist Richie Flores. It is particularly interesting hearing such unlikely material as "Blue in Green" and "Flamenco Sketches" turned into Afro-Cuban jazz. Another Kind of Blue is quite successful on its own terms and well worth picking up.
Publicada por ::-7oregons2tomates-:: à(s) 12:19