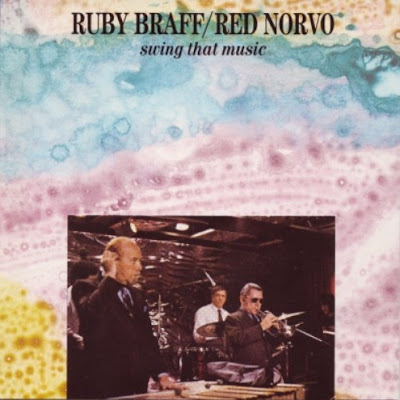 part1 + part2 + part3 + part4
Thanks to rfccbh
This two-record set combines separate sets by Ruby Braff and Red Norvo from the same 1969 Paris studio session, though both musicians use the identical rhythm section of pianist George Wein, bassist Larry Ridley, drummer Don Lamond, and guitarist Barney Kessel, who has many nice solos in both sessions. Braff, playing cornet, pays tribute to Louis Armstrong throughout his performance, ranging from a brisk "Cornet Chop Suey" and Satchmo's perennial theme song "When It's Sleepy Time Down South" to pretty ballads like "(Was I to Blame For) Falling in Love With You?" and the swinging "I've Got a Feelin' I'm Fallin'," which features some nice exchanges between Braff and Kessel. Norvo's soft mallet technique contrasts with most of the players who have followed him on the vibraphone. "Spider's Webb" has fallen into obscurity but Norvo swings it mightily. He throws a curve to anyone expecting nothing but swing with the bossa nova megahit "The Girl From Ipanema." Norvo ends his session with an inspired treatment of "Wrap Your Troubles in Dreams." Strangely, the producers evidently didn't think of adding each leader to the other's set for one number, though they are pictured together in the studio on the front cover of this long unavailable release. Although Swing That Music is not an essential acquisition for swing fans, those who locate it will not be disappointed. ~ Ken Dryden, Rovi
Publicada por ::-7oregons2tomates-:: à(s) 01:51