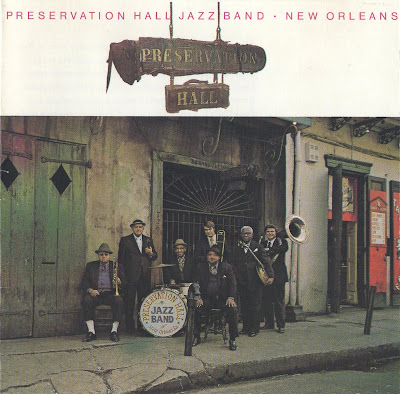 Mp3 256kbps | 11 Tracks | 59:03 min | 113 Mb
Percy G. Humphrey Trumpet Frank Demond Trombone Willie Humphrey Clarinet Narvin Kimball Banjo
Allan P. Jaffe Tuba James Edward "Sing" Miller Piano Josiah "Cie" Frazier Drums
1. Tiger Rag 7:44 - Ragas;LaRocca
2. Amen 3:18 - Traditional
3. Over In Gloryland 7:06 - Trad.
4. Good Blues 7:22 - Preservation Hall Jazz Band
5. Bill Bailey 3:56 - H.Cannon
6. Joe Avery 6:39 - Trad.
7. His Eye Is On The Sparrow 5:01 - Trad.
8. Memories 7:33 - G.Khan;E.Alstyne
9. Panama 9:51 - W.H.Tyers
Preservation Hall has been a New Orleans landmark since 1961, when it first began providing a regular stage for the city's traditional musicians. It quickly became the object of regular pilgrimages for traditional musicians and enthusiasts around the world. By the time this recording was made in 1976, the official band had coalesced around the Humphrey brothers, Percy on trumpet and Willie on clarinet, veterans already in their 70s. Their age shows only in their fidelity to the music's repertoire and instrumentation, with the band still using a banjo player, Narvin Kimball, and the younger tubaist Allan Jaffe in place of a string bass. In this vigorous traditional jazz, the band brings lifetimes of received musical wisdom to hymns like "Over in Gloryland" and Dixieland warhorses like "Bill Bailey." --Stuart Broomer
Filesonic