Buddy Bolden and the Last Days of Storyville 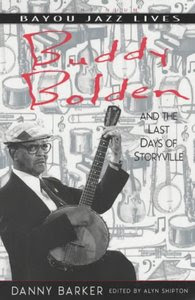 Buddy Bolden and the Last Days of Storyville By Danny Barker, Alyn Shipton
Publisher: Continuum 2001 | 164 Pages | ISBN: 0826457029 | File type: PDF | 10 mb
In 1986, jazz guitarist, banjoist, singer and composer Danny Barker (who died in 1994) published the first volume of his memoirs A Life in Jazz, which was widely praised as an addition to the history of jazz. This is a further selection of Barker's writings (beginning with a long portrait of Buddy Bolden, the first man of jazz) drawn from conversations and interviews with the generation of jazzmen that invented the music. Many of those interviewed were musicians Danny Barker knew and worked with. The book also contains Barker's own recollections of Storyville in its dying days, plus more material dating from his pioneering period of work in the big bands, with a memoir of trombonist Charlie Green, and of life on the road with Cab Calloway

About the Author
Danny Barker (1900-94) was one of the great originals of jazz, a witty singer and performer, and a member of some of the most prestigious bands in jazz history, including those led by Henry Allen, Cab Calloway, Benny Carter and Lucky Millinder.
Alyn Shipton presents jazz radio programmes for the BBC and is a critic for The Times in London. He is the author of several books on music as well as a music publisher and editor. His most recent book is Groovin' High: The Life of Dizzy Gillespie published by Oxford University Press in 1999, voted Book of the Year by Jazz Times and winner of the 2000 ARSC award for best research in recorded sound.