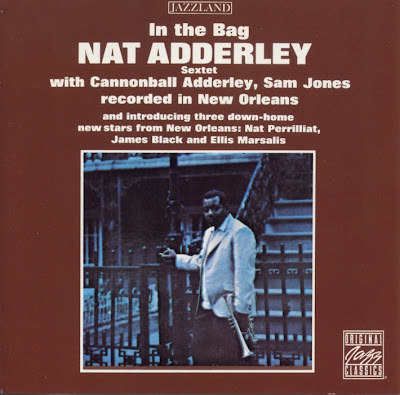 This rip is from the early 90s CD with extra tracks, sadly this is no longer in catalogue.

Thanks to The KingCake Crypt

This is an unusual album, in that it presents the results of what is probably the first modern jazz record date to take place in New Orleans. The Adderleys and Sam Jones are reinforced by three excellent young musicians, Nat Perrilliat (tenor), Ellis Marsalis (piano) and James Black— the latter being an outstanding drummer, influenced by Elvin Jones more than anyone else. Even if the other two newcomers are less than outstanding, they illustrate something I have long suspected —that there are almost as many good musicians (if not brilliant ones) who never see the inside of a recording studio as there are modest talents who are constantly thrust upon us. Nat Adderley is in fine form on this record, playing inventive solos on most tracks. As might be expected, most of the tracks are blues of one sort or another, several written by the locals. An exception is R.S.V.P., a pleasing ballad feature for Nat. Adderley addicts will want this, of course, and others are advised to hear it for James Black.
~ Michael Shera Review: Jazz Journal Vol 16 No 12, December 1963
Publicada por ::-7oregons2tomates-:: à(s) 16:36