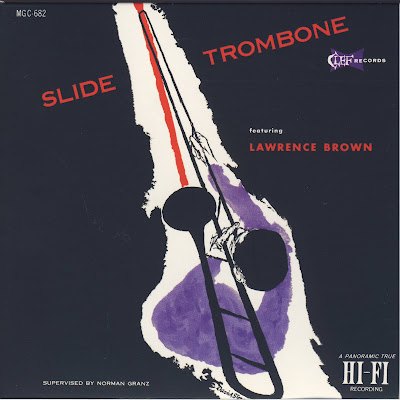 A1 Rose Of The Rio Grande (Edgar Leslie, Harry Warren, Rose Gorman)
A2 Caravan (Duke Ellington, Juan Tizol)
A3 Down The Street, 'Round The Corner Blues (Lawrence Brown, Leroy Lovett)
A4 Where Or When (Richard Rodgers, Lorenz Hart)
A5 Just One Of Those Things (Cole Porter)

B1 Ill Wind (Harold Arlen, Ted Koehler)
B2 You Took Advantage Of Me (Richard Rodgers, Lorenz Hart)
B3 Blues For Duke (Lawrence Brown)
B4 Just As Though You Were Here (Eddie De Lange, John Benson Brooks)
B5 Autumn In New York, (Vernon Duke)

Biography by Scott Yanow (Allmusic Guide)
''One of the great swing trombonists, Lawrence Brown tends to be underrated because he spent so much of his career with Duke Ellington's Orchestra. Actually, Brown's initial solos with Ellington upset some of Duke's fans because it was feared that his virtuosity did not fit into a band where primitive effects and mutes were liberally utilized. But over time, Brown carved out his own place in the Ellington legacy.
Lawrence Brown learned piano, violin, and tuba before deciding to stick to the trombone. He recorded with Paul Howard's Quality Serenaders (1929-1930) and Louis Armstrong (with Les Hite's Orchestra in 1930) in Los Angeles before joining Ellington in 1932, staying until 1951 when he left to join Johnny Hodges' new small group. After 1955, Brown became a studio musician in New York, but then spent 1960-1970 back with Ellington (where he reluctantly had to play some solos with a plunger mute) before retiring. Although he only led two albums of his own (a 1955-1956 outing for Clef, 'Slide Trombone' and 1965's 'Inspired Abandon' for Impulse), Brown was well-featured on many recordings with Ellington through the years; "The Sheik of Araby" (1932) and "Rose of the Rio Grande" (1938) were favorites.''