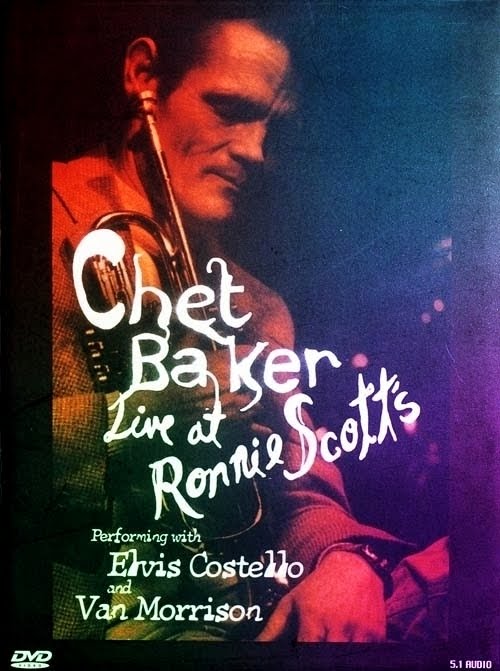 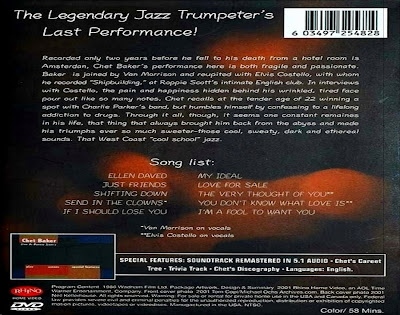 Chet Baker's appearance at Ronnie Scott's in London was taped near the end of his life, when the ravages of drug addiction were apparent in his face as well as his demeanor on stage, but the magic was still present in his playing. Baker starts slowly with the bittersweet ballad "Ellen David," following it with his fragile vocal interpretation of a lightly swinging "Just Friends," though he is a decent scat singer. "Shifting Down" is an obscure work by Kenny Dorham that is one of the high points of this concert for Baker. Unfortunately, the visuals to the opening of the funky "Love for Sale" are ruined somewhat by the director's inane decision to emulate MTV videos and use a series of stills instead of just sticking to the action on stage. Interview excerpts taped offstage are interspersed between some of the tracks, though Elvis Costello's technique as an interviewer is rather erratic. Guest segments include a painfully dull rendition of "Send in the Clowns," featuring Van Morrison blandly reciting the lyrics with a cheat sheet in hand for reference; Elvis Costello also has to have the lyrics handy while performing his numbers with Baker ("The Very Thought of You" and a medley of "You Don't Know What Love Is" and "I'm a Fool to Want You"), which he delivers with a straight pop approach rather than trying to improvise, although he at least seems to know these standards. Pianist Michel Grailler and bassist Riccardo del Fra provide excellent support, the camera work and sound are excellent except for a few minor lapses, and the audience is respectfully silent until the conclusion of each piece -- a near impossibility in most nightclubs in Baker's homeland. Fans of Chet Baker will greatly enjoy this DVD, warts and all. ~ Ken Dryden, Rovi
Publicada por ::-7oregons2tomates-:: à(s) 18:42