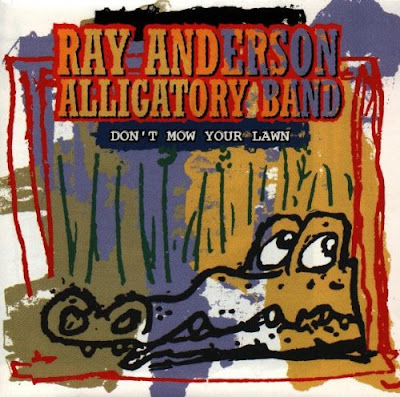 TRACKLIST
1. Don't Mow Your Lawn
2. Diddleybob
3. Damaged But Good
4. Alligatory Pecadillo
5. What'cha Gonna Do With That
6. Airwaves
7. Blow Your Own Horn
8. Disguise the Limit

Chicago-born Ray Anderson started on the trombone at the age of eight, mainly influenced by blues bands and Dixieland records. One of the most important innovators on his instrument, his playing compresses 70 years of jazz ranging from traditional up to funk and free form. Along with numerous releases as a leader, Ray has performed and/or recorded with the bands of Gil Evans, Anthony Braxton, Carla Bley, David Murray, Bennie Wallace, Charlie Haden, George Russell, and many others. For several years now, he has been winning most of the international trombone polls.

With the debut recording of his new Alligatory Band, Ray Anderson updates the heavy funk concept of the well-remembered Slickaphonics he co-led in the eighties. The new sextet gives the essence of fiery funk jazz with great solos on trombone, trumpet and guitar, an irresistible rhythm section and energetic vocals by the leader offering some strange and humorous lyrics. The CD "Don't Mow Your Lawn" is groove and fun and will be presented along with a beautiful 12-page fold booklet.
Publicada por ::-7oregons2tomates-:: à(s) 19:06