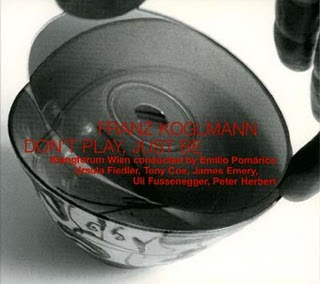 fileserve
Franz Koglmann, who likes to cross borders, pursues a dialogue between styles. Using this dialogue, which he consciously allows to include disruptions, Koglmann elegantly and expertly weaves his way along a path that avoids both the classical jazz clichיs and the hermetics of e-music. His cool way of bridging worlds is often referred to as the "3rd Vienna School" by critics.

On Don't Play, Just Be Koglmann collaborates with one of the world's leading New Music orchestras, the Klangforum Wien, conducted by Emilio Pomבrico, and with outstanding jazz soloists. He impressively succeeds in harnessing the traditions of classical modernism and jazz for his very own world of sound.

The four movements of the suite Don't Play, Just Be are a dialogue between a jazz quartet the legendary British tenor saxophonist and clarinetist Tony Coe, guitar virtuoso James Emery from New York, Franz Koglmann on the flugelhorn and Klangforum bassist Uli Fussenegger and composed and written processes of European e-music. The dialogue is enhanced by references to a text by Jean Cocteau and the films of Jacques Rivette, as well as hints of French film scores brought in by the accordion and violin.

The second section of the CD, entitled Spהte Liebe (Late Love), features four songs based on texts by Franz Schuh. Koglmann's music gives a gentle ironic twist to the poems, which are moving in their existential immediacy and are interpreted with great subtlety and virtuosity by the outstanding soprano Ursula Fiedler.

The final track on this CD, which is so exemplary of Koglmann's work, is a piece typical of his Monoblue Quartet. Conceived as a signature tune for "Reporters without Borders", it allows Koglmann and his exceptional musicians to highlight once again the essence of Koglmann's music on this CD: a melodious and delicate, smiling melancholy.

Koglmann divides this set into two theme pieces: “Don’t Play, Just Be (for quartet and chamber orchestra)” and “Spate Liebe (4 Songs based on poems by Franz Schuh for soprano, quartet and chamber orchestra).” Many of these interleaving works feature the leader’s clement and strikingly lyrical flugelhorn work amid swinging grooves and a series of mood-altering passages.

The artists periodically disseminate a cool, sleek, West Coast (jazz) vibe to coincide with accordionist Krassimir Sterev’s exquisitely rendered accents. All that and much more! Koglmann’s latest brainchild looms as one of his most audacious efforts to date. Recommended."