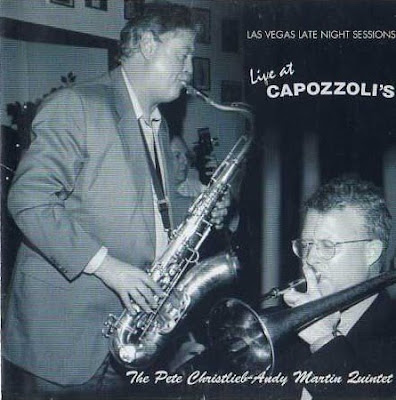 Contributed by King2b
THNK YOU !!!

TRACKLIST
1. just friends
2. things ain't the way they used to be
3. willow weep for me
4. what is this thing called love
5. darn that dream - polka dots and moonbeams
6. speak low

REVIEW
It seems so simple but so few labels do it. Team together five strong bop-oriented players, all of whom have developed original voices on their instruments while remaining tied to the jazz tradition. Put them in a relaxed environment with a good piano, allow them to pick out a list of standards to jam and then have someone have someone count off the time. It sounds too easy to be so successful yet so much of the best jazz happens this way.The key is to match together musicians who, although compatible, have not necessarily played together with each other in this setting all that often. All five jazzmen on this set have long been underrated and yet are consistently in great demand in the studios and as sidemen for jazz combos, particularly in the Los Angeles area. Pete Christlieb, whose big tone on tenor was major asset for Doc Severinsen’s Tonight Show Band in the 1970’s and 80’s has been finally gaining some long overdue recognition for his hard-driving style and quick imagination. Speaking of rapid, trombonist Andy Martin can keep up with most saxophonists when it comes to both speed and fertile ideas; like Christlieb he works often with big bands where he invariably ends up being one of the orchestra’s top soloist.The rhythm section is far from overshadowed by the impressive frontline. Terry Trotter has worked extensively in the studios, with Larry Carlton and as an accompanist to such singers as Ella Fitzgerald, Natalie Cole, Jeannie Bryson, Frank Sinatra and even Kenny Rogers. But it is with his own trios and in this freewheeling quintet that the pianist really comes into his own. Bassist Jim Hughart, a member of Joe Pass’ classic For Django quartet, has worked with Trotter many times through the years, including with Natalie Cole. Drummer Dick Berk appeared with Billie Holiday at the 1958 Monterey Jazz Festival and has been busy ever since, both as a sideman and as a leader, most notably with his Jazz Adoption Agency which helped introduce a young trombonist named… Andy Martin!The tunes on their set will be familiar to straightahead jazz fans but the solos are fresh, enthusiastic and unpredictable, and the performances (even with high expectations) are even better than expected. In other words, everything works!
Scott Yanow, Editor, All Music Guide To Jazz
Publicada por ::-7oregons2tomates-:: à(s) 19:18