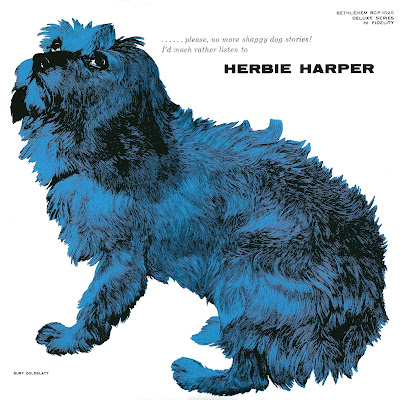 rapidshare
REVIEW:
A fine trombonist active in the West Coast jazz scene of the 1950s, Herbie Harper spent most of his playing time after 1955 as a studio musician, although he occasionally re-emerged in the jazz world. After playing with Charlie Spivak’s Orchestra (1944-1947), Harper settled in Los Angeles, where he gigged with Teddy Edwards and had short-time associations with Benny Goodman, Charlie Barnet, and Stan Kenton (1950). In addition to recording in the 1950s with June Christy, Kenton, Maynard Ferguson, Benny Carter, and Barnet, Herbie Harper led five albums of his own during 1954-1957 for Nocturne, Tampa, Bethlehem, and Mode. He mostly worked in the studios afterwards, but emerged to play with Bob Florence’s big band and, in the 1980s, he recorded for SeaBreeze and with Bill Perkins for VSOP.
~ by Scott Yanow, AMG
Thanks to Raz Jazz Is My Life : )