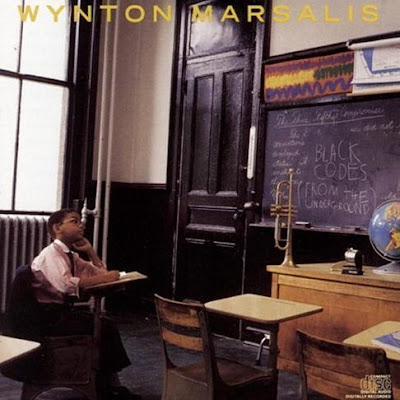 Review:
This is probably the best Wynton Marsalis recording from his Miles Davis period. With his brother Branford (who doubles here on tenor and soprano) often closely emulating Wayne Shorter and the rhythm section (pianist Kenny Kirkland, bassist Charnett Moffett, and drummer Jeff Watts) sounding a bit like the famous Herbie Hancock-Ron Carter-Tony Williams trio, Wynton is heard at the head of what was essentially an updated version of the mid- to late-’60s Miles Davis Quintet (despite Stanley Crouch’s pronouncements in his typically absurd liner notes about Marsalis’ individuality). The music is brilliantly played and displays what the “Young Lions” movement was really about: young musicians choosing to explore acoustic jazz and to extend the innovations of the pre-fusion modern mainstream style. Marsalis would develop his own sound a few years later, but even at age 23 he had few close competitors.
by Scott Yanow (allmusic.com)
Publicada por ::-7oregons2tomates-:: à(s) 16:57