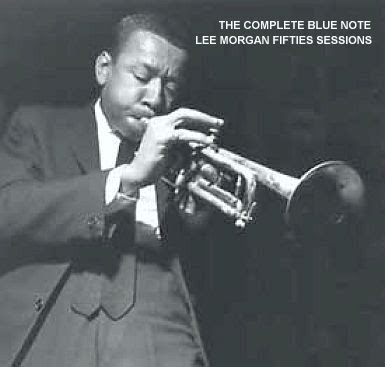 Bio:
Lee Morgan was a stalwart of the driving jazz-meets-funk-meets-blues grooves produced by Blue Note in the 1960's. A flashy player of enormous technique and invention, he became the natural successor to Clifford Brown, emerging on the jazz scene shortly after Brownie's death in 1956. Morgan quickly developed his own style, fusing classic bebop motifs with more modern rhythms, harmonies and melodies.

Born in Philadelphia on July 10, 1938, he began his trumpet studies with a private instructor, and continued them at Mastbaum High School for the Arts, where he also played the alto horn. A fan of jazz from an early age, he was exposed to a wide variety of live music in the vibrant Philadelphia music scene, which had produced such notables as John Coltrane, Benny Golson, the Heath brothers, and many others.

By the time he was 15, Morgan was leading his own group with bassist James "Spanky" DeBrest as his partner. He was also taking part in Tuesday night workshops at the Music City club, which brought him into early contact with Miles Davis and his primary early influence, Clifford Brown. After Morgan graduated from Mastbaum in 1956, he and DeBrest subbed with the Jazz Messengers when Art Blakey arrived in Philadelphia short two musicians. "Spanky stayed on," Morgan explained in the liner notes to his first Blue Note album. "I could have stayed too, but I didn't want to sign a contract, so I left after two weeks. Very soon after that, Dizzy Gillespie returned from his South American tour. Morgan's career took off when he joined Dizzy’s big band at the age of 17.

Dizzy was always a generous teacher, and allowed his young protégé plenty of solo space. This provided Morgan an excellent opportunity to gain experience before his return to Blakey's group in 1958 after Dizzy’s group disbanded. That year he recorded, Candy, his first of twenty-five Blue Note recordings as a leader, and though he was only 18 at the time, Morgan had already attracted attention with brassy acrobatic solos that heralded the arrival of a significant, new talent. While working with the Jazz Messengers, Morgan formed a great partnership with tenorist Benny Golson, and their shared sense of timing and musical rapport is obvious on the album Moanin', both on the title track and on numbers such as Blues March. Morgan shared the Messengers frontline with Golson, Hank Mobley and then Wayne Shorter until a heroin problem forced him to leave the band in 1961, (when he was replaced by Freddie Hubbard).

He returned to his native Philadelphia for a few years, where he maintained a low profile while battling his addiction, working occasionally with saxophonist Jimmy Heath. He returned to New York in 1963, where he recorded, The Sidewinder, on the Blue Note label with sideman Joe Henderson, This was Morgan’s greatest commercial success. He entered his greatest period, recording one memorable album after another, writing "Ceora" and "Speedball" and spending a second period with Blakey (1964-65).

He also recorded widely as a sideman on many classic jazz albums such as Gillespie's Night In Tunisia, John Coltrane's Blue Trane, Grachan Moncur's Evolution and dates for others, including Curtis Fuller, Philly Joe Jones, Wynton Kelly, Clifford Jordan, Hank Mobley and Wayne Shorter. Morgan was as comfortable unleashing dynamic displays of instrumental virtuosity on triple time blues as he was displaying controlled sensitivity and passion on ballads. His style included elements drawn from Dizzy Gillespie and Clifford Brown, but his own wide, crackling tone, his use of bluesy phrasing and effects, searing high register, human-voiced half-valve effects, and his dancing, funky, timing, was the essence of hard-bop.

Morgan's later bands featured Bennie Maupin or Billy Harper on saxophone, and while the modal jazz direction taken by many other bands became more prominent in his compositions, Morgan remained at heart a hard-bop trumpet player.

Lee Morgan’s fast lane lifestyle ended on February 19, 1972, when he was shot dead by his common-law wife, Helen More, during a performance at Slug's in New York, ending his life at the age of 33.