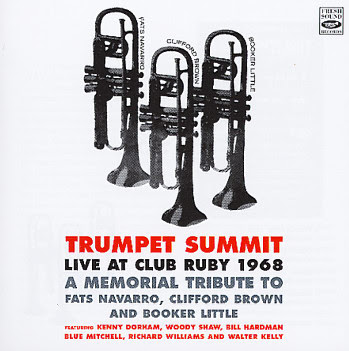 This album is hard-bop heaven for trumpeters. Billed as a tribute to Fats Navarro, Clifford Brown and Booker Little, it features Woody Shaw, Kenny Dorham, Bill Hardman, Blue Mitchell, Richard Williams and the little-known Walter Kelly. The presence of so much concentrated brass firepower naturally brings out the competitive spirit. Shaw—23 at the time—dazzles with explosive pentatonics. His work on an uptempo version of “What’s New” answers the song’s title with a conception that would eventually solidify his place as an innovator. Dorham, on “Bags Groove” and “Confirmation,” shows off his mastery of bop’s harmonic language. You can hear how he had influenced Shaw at the time.

Mitchell takes a more lyrical, controlled approach to the proceedings and scores via contrast.

Hardman and Williams—lesser lights in the hierarchy—acquit themselves well in the contest. Kelly, more erratic, nevertheless holds his ground. The rhythm section—pianist Lonnie Liston Smith, bassist Peck Morrison and drummer Walter Perkins—is spirited and aggressive (especially Perkins on the nearly 20-minute “Sweet Clifford”). I wonder if such a tribute were held today, who would be called and whether the results.