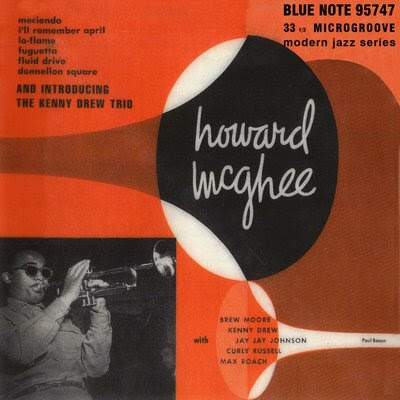 This 1998 CD has all of the music from two formerly scarce 10" LPs.
Trumpeter Howard McGhee heads an all-star group that includes trombonist J.J. Johnson, tenor-saxophonist Brew Moore, pianist Kenny Drew, bassist Curly Russell and drummer Max Roach on "I'll Remember April," an original by the leader and four songs (plus an alternate take) by Drew who was making his recording debut. Because it was the tail-end of the 78 era, all of the performances are between 2:34 and 3:07 in length but the concise solos are generally quite strong. Although McGhee gets the top billing on this CD, the second half of this disc is actually by the Kenny Drew Trio (with Russell and drummer Art Blakey) from three years later, Drew's debut as a leader. Other than his "Gloria" and the basic "Drew's Blues," all of the music (which is augmented by two alternate takes) is standards including "Be My Love," "Yesterdays" and a surprisingly heated rendition of "It Might As Well Be Spring."
Easily recommended to bebop collectors